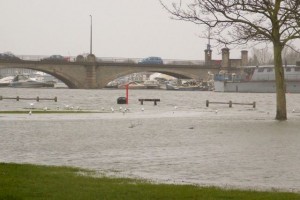 In this section we include various items illustrating high water events on the River Itchen. These include: