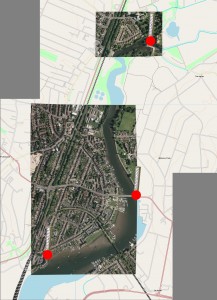 As part of the CCATCH Project, three Tide Markers were installed along the River Itchen. The markers installed in the water have large wooden posts with notches carved in them which can be used to give an estimation of the water height. Accompanying the markers is an information board giving details on how to interpret the marker as well as other facts about the site at which they are located.

Why have tide markers been installed?

At the public meeting on 24th January 2013, residents were asked to identify a number of short-term practical actions within the next year that would help the community understand and better deal with flood risk in the area. One of the actions identified was the installation of tide markers as it was felt that the provision of a marker and interpretation board would be informative and help the community understand the river further.

The markers are not being called  ”tide gauges” since  residents thought that that would imply that that tide data would be recorded. However that is not being done. Rather the markers will be a visual aid to understanding the tide.

Where are the markers?

On the 22nd February 2013, several community members walked along the river to choose possible locations for the markers to be installed. The three locations finally chosen are:

These sites were chosen because the spread across the area of the CCATCH project area meant that all community members would have the opportunity to see the markers and accompanying boards. Secondly they would allow the wider community to learn about the project and the River Itchen, as all sites are well used by people living in the city of Southampton.